What's Under the Covers? 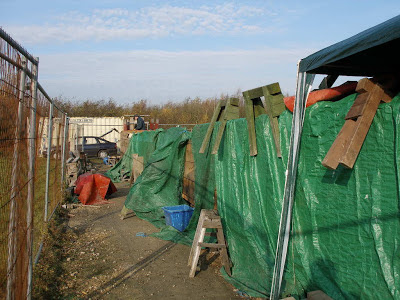 It’s mid November 2012, and what’s under the covers?  It’s a narrowboat being built, and it's no exaggeration to write that it’s of a kind the like of which you have probably never seen.  Not because she’s a new design  -  the exact opposite in fact.

But she’s not a replica, instead she’s the next in line of her unique class, it’s just that it’s been over eighty years since the last one was built.  A cargo-carrying wooden narrowboat with hybrid power systems  -  horse and sail.

Boats such as these operated on a standard narrow canal, a waterway built to the same dimensions as many at the centre of the national network.  But because the Chesterfield Canal is on the fringes of that network its narrowboats did not develop in the same way as elsewhere.  Instead they remained unchanged over centuries and were never adapted to engine power. 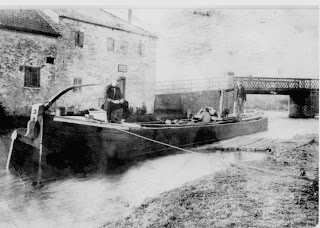 They had two cabins, one in the bows and the main one at the stern, but they were below, with access through hatches in the decks.

There was a crew of two, who did not live on the boat. They always had homes ashore.


The fundamental influences on their design, other than the narrow canal dimensions, were the vessels that plied the Trent and the other rivers of the region, especially the inland keels.  This was bound to happen because the same men built both types.  Therefore, the narrowboats of the Chesterfield Canal could be described as narrowkeels, a development not seen anywhere else  -  in the world!

Unfortunately none of these craft survived the end of cargo-carrying on the Chesterfield Canal, in the 1950s.  However, one, named Ida, survived long enough for astute people to measure, photograph, and note her dimensions  -  people who then waited many decades for the opportunity to create a new Chesterfield Canal narrowboat  -  and that’s what’s under the covers.

Her name has not yet been announced, but she is being built by the New Dawn Project, and it's being done by using traditional tools, materials and methods, no power options here.  The workforce consists of members of the Chesterfield Canal Trust led by the man whose knowledge makes it all possible, David Bownes, a boat-builder who worked on repairing these boats many years ago.  The funding was raised amongst the membership of the CCT, plus donated materials, such as flannelette, hand-tools, clamps and wooden ladders.

So in November 2010 they set to, the team of volunteers learning from scratch some of David's wood-working skills.  It was a steep learning curve but they were fulfilling a dream. 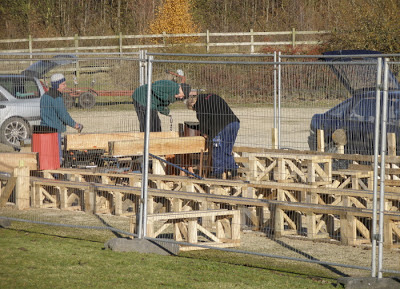 November 2010. The boat will be built on the stocks, the trellis-like forms, which have already been made by hand.  The two planks being worked on are the first of the many "bottoms" which will, you've guessed it, form the bottom of the boat. Being planed and drilled by hand - as has everything else. 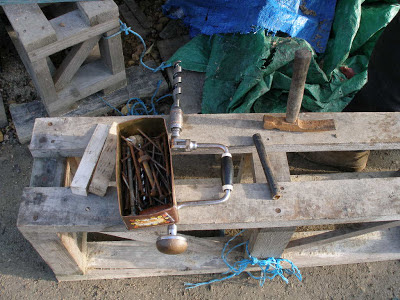 The kind of tools used.
The modern blue twine and the synthetic sheets are only there to cover the boat when work is not being done. No modern materials have been used in building the boat. 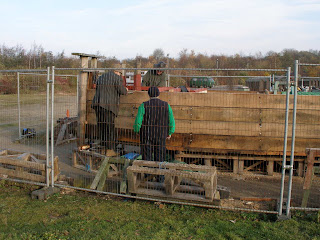 Two years on, November 2012, and considerable progress has been made. The bottom and flooring have been done, and four runs of planking now form the 70ft sides. 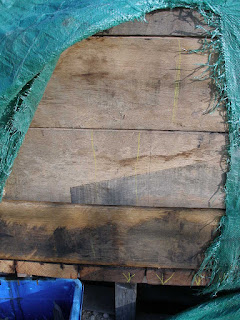 The gaps between the edges of the side planks (strakes) will be sealed.

In the second strake up can be see the type of joint used to fit them together along the sides. 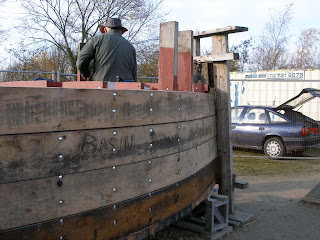 A major operation has been steaming some of the strakes to bend them around to form the shape of the bows and the stern.

The upright timbers are the headstock, a temporary fixture keeping the bow timbers in place until they are locked in by other permanent planking. 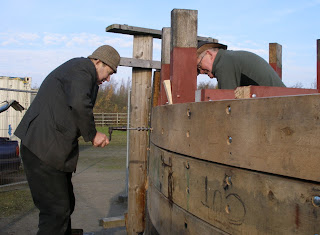 It's labourious work, but fulfilling.  Probably a once in a life time opportunity. 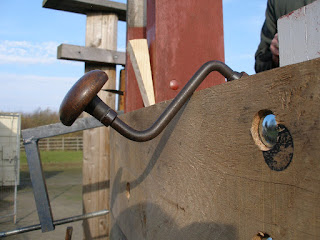 The countersunk bolt holes will be plugged with tar and resin. 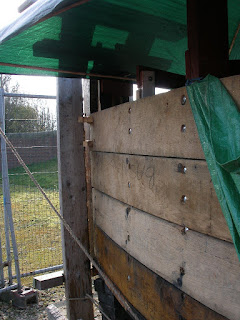 Steamed strakes near the stern.  Again a temporary headstock can be seen, holding the planks in place, the same as at the bows.﻿ 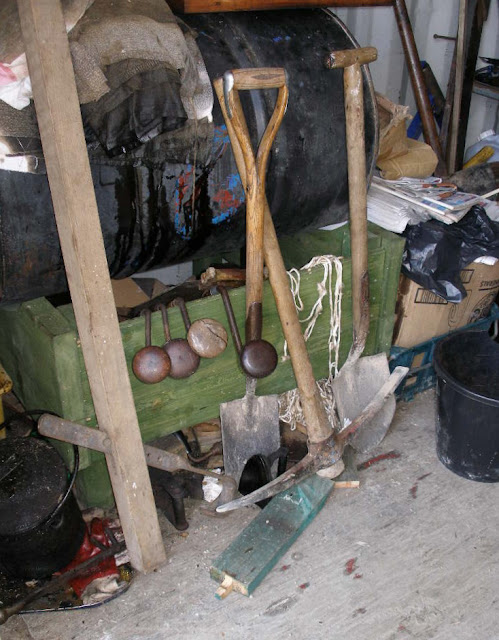 This scene is so evocative of the entire project.
It's of another age, and smells of tar and timber.
When the boat is finished there will be no sign of what is called "traditional" roses-and-castles canalware decoration  -  that didn't spread to this part of the network.
What she will have, at some time in the future, is a mast and sail for when she ventures out onto the tidal Trent.  The boatmen of the Chesterfield Canal had no fear of the river, but plenty of respect, because it allowed them to reach other markets for their cargoes. 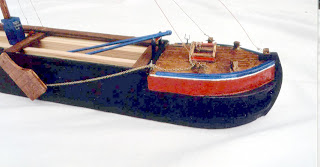 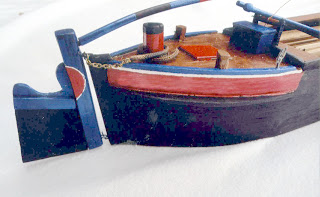 A model giving an impression of what the bows and stern of this unique narrowboat will look like.
Geography ordained that the narrowboats of the Chesterfield Canal would be of a unique type.  Soon, there will be a new one.
Posted by Christine at www.richlow.co.uk at Thursday, November 22, 2012 No comments:

This sometimes too narrow narrow lock is being widened by CRT (see Updates - October 2012).  A task welcomed after decades of difficulties for a minority of boats that could not pass through its chamber.

There is a unique opportunity to visit these works on a CRT Open Day, Sunday, 25 November.  Visitors will be able to walk inside the lock-chamber, and see and ask how this skilled operation is being undertaken.

A57 Worksop Bypass - A60 roundabout (Sainsbury's), the lock is at the side of The Lock Keeper pub, parking available in the pub's car-park.  Post code for sat-navs S80 1TJ. 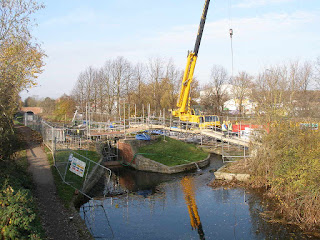 An access ramp to the lock, and across to the chamber, is being installed.
(Photo 16 November). 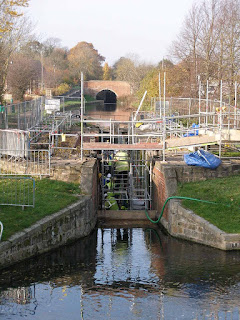 Installation is also underway of steps down into the chamber.  (Photo 16 November).

The towpath has remained open during these works.

Posted by Christine at www.richlow.co.uk at Friday, November 16, 2012 2 comments:

Below Rotherham Lock there has always been a length of moorings but until recently it has been out of use, with no pedestrian access to/from them.  The moorings have now been re-opened as part of the rebuilding of Rotherham Central railway station, with a ramp up to the station's adjacent car-park. 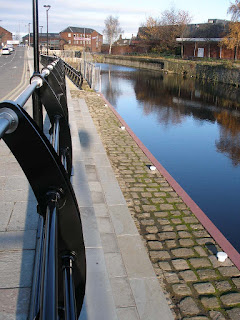 The moorings are about double the length shown here. 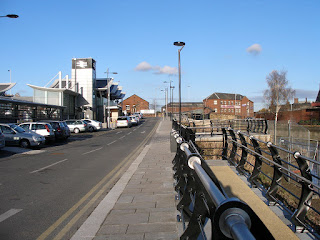 At the top of the ramp is the station car-park. The red buildings are on the main road.  Turn left, and over the railway, for a Lidl supermarket.

Turn right for the bus station and the town centre.

There is also a taxi-rank by the side of the railway station.


South Yorkshire Waterways  -  a guide to the whole of the Sheffield & South Yorkshire Navigation (SSYN).  Available from www.richlow.co.uk   Written by People Who Go There!

Posted by Christine at www.richlow.co.uk at Thursday, November 15, 2012 No comments:

This power-station was at the junction of three waterways, the New Junction Canal, the Don Navigation, and the Stainforth & Keadby Canal.  It's cooling-towers were a navigational aid visible for many miles across the flat landscape.  It ceased operation in 1994 and I took the following pictures in that year, thinking I would soon have "before" and "after" scenes.

Eighteen years later!  -  Thorpe Marsh power-station has eventually gone, to be replaced with a gas-fired type on the same site. 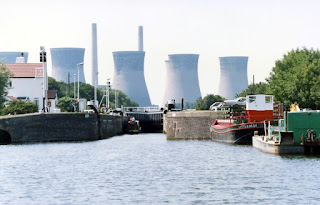 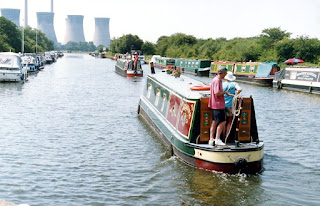 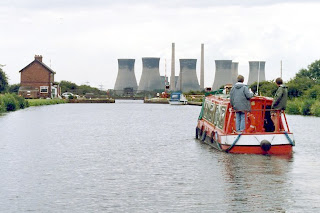 On the New Junction Canal.

The demolition of Thorpe Marsh power-station has made a major change to the landscape for three of the waterways of the Sheffield & South Yorkshire Navigation.

Posted by Christine at www.richlow.co.uk at Friday, November 02, 2012 No comments: