In 2010 whilst researching the second part of Richlow's two South Pennine Ring guides, John & Barbara cruised their boat nb Madeley Wood from Sowerby Bridge to Ashton  -  along the Huddersfield Broad and Narrow canals.

They also walked the entire route, including over Standedge Tunnel (twice!).

These photographs reflect their experiences, and may perhaps encourage others to boat across the Pennines. 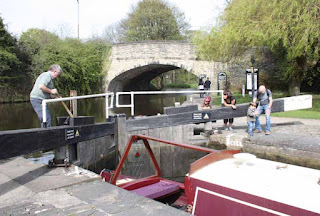 At Salterhebble, on the Calder & Hebble Navigation.  Note the unique handspike-operated gate paddles (or "cloughs" as they are know locally). 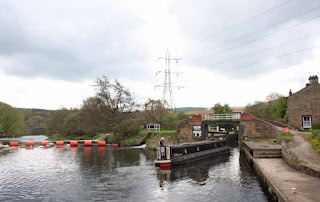 The start of the Huddersfield Broad Canal at Cooper Bridge.  nb Thief of Time is leaving the River Calder and entering lock no.1. 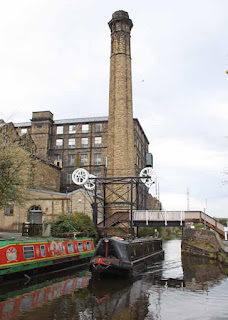 The unique Locomotive Bridge on the Huddersfield Broad Canal, in Huddersfield.  The deck remains horizontal and is lifted on wire ropes.
When we first started boating here, we used to wind a handle and hope the road traffic would stop.  Now there are road-barriers and the bridge lifts electrically at the push of a button.
For some reason British Waterways have recently put up bridge-name signs calling this Quay Street Bridge  -  but we think it will always be known as Locomotive Bridge. 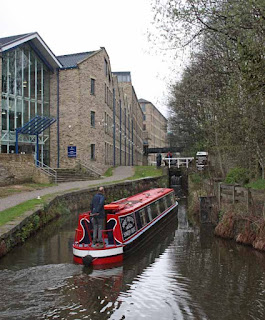 Lock 3E and Sellers Tunnel
Now you see them  -
now you don't!

As part of the Millennium restoration of the Huddersfield Narrow Canal, a new tunnel was constructed beneath the Sellers factory, and a new Lock 3E was installed at the upstream end.  Now in 2012 the factory has been relocated and the site is being redeveloped.  As a result, the tunnel has been abandoned, with the canal rebuilt at ground level.  A third Lock 3E has been built close to the original one, which boats sail straight through near Chapel Hill.  The towpath is now open through this section. 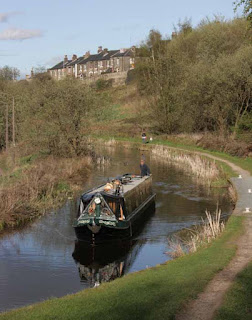 Leaving Huddersfield behind, the scenery becomes more rural on the approach to Lock 12E.﻿ 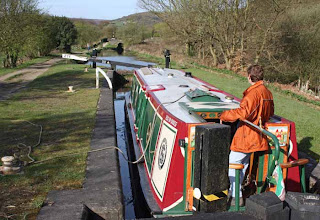 The landscape is spectacular in the upper Colne valley between Slaithwaite and Marsden.  Boating is hard work with the locks close together, has seen here at Lock 27E. 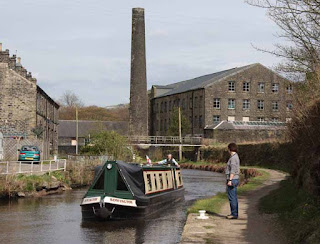 The Colne valley bottom was lined with stone-built water-powered mills and their dams.  Many still remain  -  this one is at Sparth below Lock 32E. 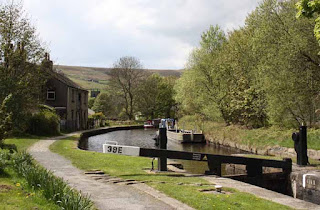 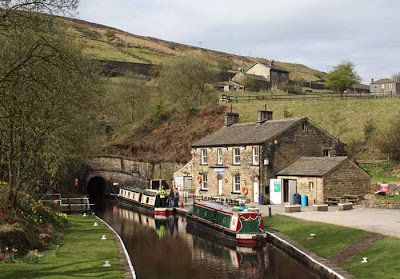 Standedge Tunnel is the highlight of navigating the Huddersfield Narrow Canal.  Tunnel passages have to be booked in advance.  We had to wear safety equipment to boat through the three and a quarter mile tunnel, and we were accompanied by a pilot.  The tunnel is full of interest but our cat was terrified by the echoes, especially those of trains passing in the adjacent railway tunnel. 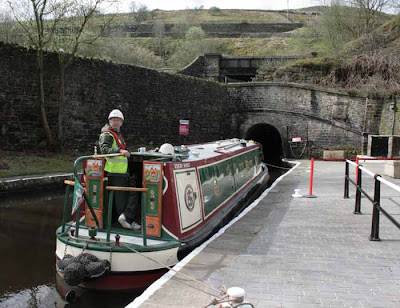 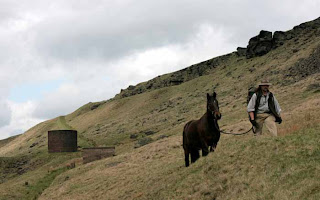 On a walking visit over the tunnel top we accompanied a group from the Horse Boating Society, with their horse Bonnie.  The rough nature of the high Pennine hills can be seen, and also some of the tunnel ventilation shafts. 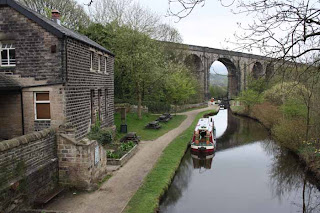 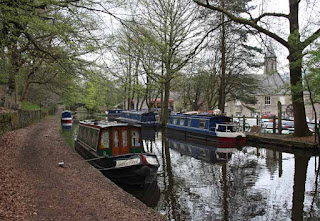 As a result of the restoration of the Huddersfield Narrow Canal, Greenfield has become a popular tourist venue.  There are pleasant, convenient moorings from which to visit the museum, small shops, cafes and pubs, in this thriving little town. 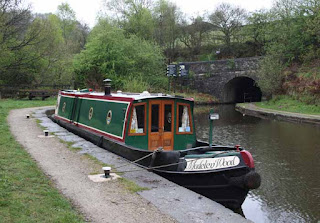 The "other" tunnel on the Huddersfield Narrow  -  the short Scout Tunnel between locks 12W and 11W  -  cut through a rocky bluff in the valley side.  It is unlined and has a towpath, giving walkes an opportunity to see the naked Pennine rock. 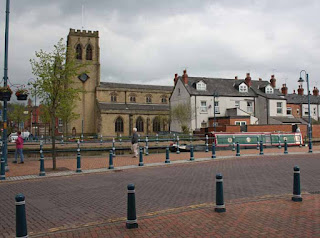 Stalybridge.  Where else can you moor up in a town centre like this!  Good moorings to explore this Lancashire mill-town. 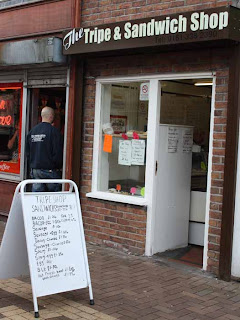 There are some excellent small shops including this gem.

Where else but in Lancashire?

We hope these images may encourage more visitors to the Huddersfield canals  -  Broad and Narrow.


If so, the Richlow guide South Pennine Ring - Part 2 is available post free from www.richlow.co.uk